Regional physical geography is a bit dated these days with a greater emphasis being placed on processes and principles.  In the past however regional geography was a big deal and to be able describe the climate, vegetation and soils of the world region-by-region was an end in itself.  To assist with this task a range of climate classification systems were developed.

The Köppen classification is probably the most widely recognised.  Wladimir Köppen (1846-1940) developed the scheme in 1884 making several modifications the last of which was in 1936.  It is sometimes known as the Köppen–Geiger climate classification due to later modifications made by Rudolf Geiger in 1954 and 1961).  It is a zonal scheme, warm and wet in the equator moving outwards through the dry and arid subtropics to the temperate mid-latitudes and the polar deserts beyond.  It reflects global atmospheric circulation and the heat engine modified by land-ocean distribution. 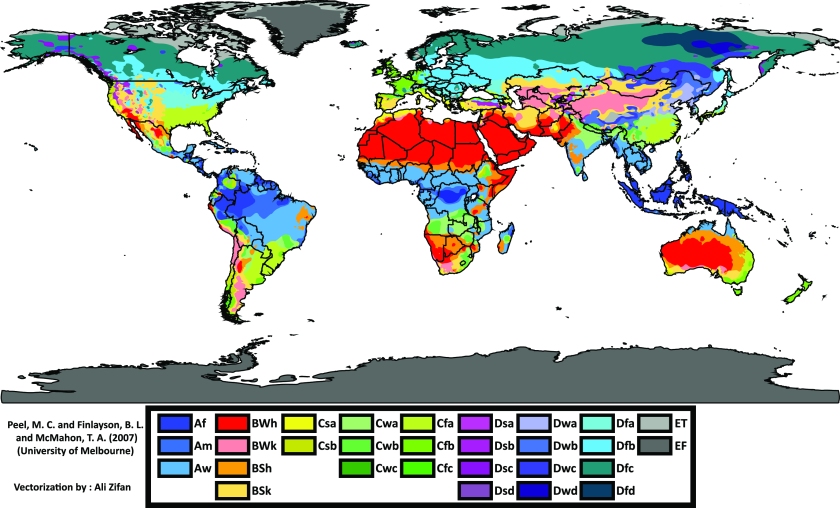 Looking beyond the classification to the underlying principles is at least in my view more useful especially if we are to understand the climate of past or future continents and/or Worlds.  A hypothetical continent is often used to convey these principles, like the one in Figure 2.  You can find a similar more sophisticated version on the web here.

Figure 2: Climate Zones for a hypothetical continent straddling the equator.

So crudely speaking this has warm wet climates close to the Equator, dry ones in the subtropics and temperate ones in the mid-latitudes.   It follows the zonal pattern we would expect given that there is an excess of heat in the equator a deficit in the poles.  The warm-wet Equatorial region reflects the location of the Inter-tropical Convergence Zone.  This will move north and south as the overhead sun varies between the solstices. The humid equatorial regions extends both north and south to a greater degree on the eastern side of the continent due to the influence of the trade winds which bring moist air on to land.  There may also be strong monsoonal influences in these locations.

The subtropical zone is associated with warm descending air linked to the returning surface winds which completes the Hadley Cell .  The arid and semi-arid regions on the western side of the hypothetical continent are the manifestation of this.  Note that they extend further north into the centre of the continent in the Northern Hemisphere.  This is due to a ‘continental-effect’ given their distance from the ocean.  Land heats up and cools rapidly giving temperature extremes and there is little moisture due to the distance inland.  In the Southern Hemisphere this arid zone is modified by the presence of a chain of mountains.  Note it extends further south on their lee-side due a rain shadow effect.  Equally this arid zone also extends further north toward the equator along the coast due to the presence of off shore winds.  In South America today the movement of the trade winds and associated ocean currents is offshore which causes coastal up-welling of cold ocean waters and also ensures that any moisture moves off-shore rather than on-shore.  The Atacama Desert is the result.  It is worth noting that this pattern is influence by the El Nino and there is no reason to suggest something similar would not be active on our hypothetical continent.

The mid-latitudes show a contrast west to east due to the influence of the westerlies.  The western seaboard of our continent is wet and mild with a strong maritime influence.  In contrast the eastern seaboard is drier and subject to greater continental extremes.   By finding current cities/regions that match those on the hypothetical continent you could  augment the picture further with climate data.  Figure 3 is a crude sketch of what the vegetation zones might look like.

Figure 3: Hand drawn sketch of what the vegetation zones associated with Figure 2 might look like. Forgive my handwriting!

Ocean currents could be added to this hypothetical world and you could speculate on what if any thermohaline circulation might exist.  Think about the salinity balance.  Cold, saline water is dense and will sink, warm fresh water will not.  Where are the regions of greatest evaporation, where in the freshwater runoff likely to be most marked?

You can use these principles as we have above for the hypothetical continent and apply them to Pangea, or in the case of your course work (Physical Geography 2018/19) to Pangea Ultima (Fig. 4).

Figure 4: An image of Panage Ultima based on the work of Scotese  and the one you have been provided with for your Physical Geography Coursework in 2018/19.