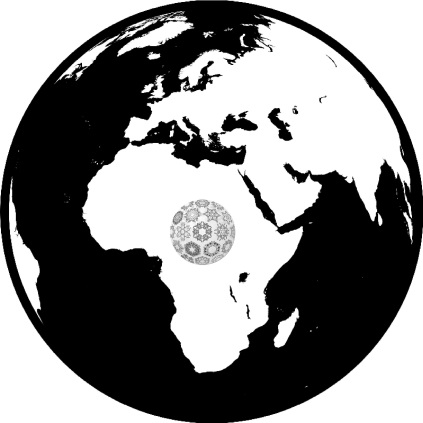 A global glaciation sounds like something out of a disaster movie in which the intrepid heroine has to save the world.  We associate glacier and ice with the poles, perhaps with high tropical mountains like Kilimanjaro but not with the tropics in general – they are to warm, verdant with vegetation and the coasts have golden sand and coral reefs at least according to the travel brochures.  As early as the turn of the twentieth century the Antarctic explorer Douglas Mawson (1882-1958; Fig. 1) was finding evidence in Australia for Precambrian glaciations at low latitudes.  Throughout the twentieth century tillities, fossilised glacial till, were increasingly found with low palaeo-latitudes.  Only with the advent of the plate tectonic paradigm did geologists have the framework to reconstruct past continental palaeo-geographies and with it assess the true implications of these low latitude tillities.  The radical idea of a global glaciation – poles and tropics – was proposed in the 1990s and Snowball Earth was born.  As a concept it has been linked to the origins of multicellular life and for some it represents the closest the Earth has come to extinguishing all life, but for others the paradigm lies hollow.  Fierce debate has ensured and illustrates the often combative nature of science. 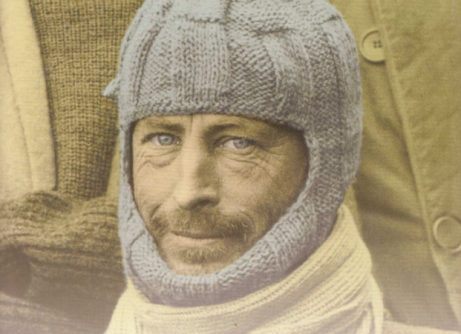 Figure 1: Douglas Mawson (1882-1958) professional geologist and leader of the Australasian Antarctic Expedition in 1912.  The story of the expedition is recorded in Home of the Blizzard by Frank Hurley. (Source: http://alchetron.com/Douglas-Mawson-1258009)

Preservation of tills and diamictons

Imagine a kitchen table piled high with cake mix – preferably an almond cherry cake.  Using your arm you sweep the mix into a cake tin, some falls on to the floor and some is left on the table.  The only cake mix to survive, assuming you clean up, is the cake in the tin (or basin).  It is the same with sediments; land erodes and sediment is preserved in depositional basins, usually marine basins, where it is lithified and folded by plate tectonics.  As a consequence much of our understanding of Earth history comes from the marine record.  The preservation of evidence for icehouse periods (ice ages) prior to the Cenozoic (i.e., last 65 million years) is no exception.

The record of these pre-Cenozoic glaciations comes in the form of diamicton.  What is diamicton you might well ask?  It is a non-genetic term for poorly sorted sediment with a wide range of grain-sizes present (Fig. 2). 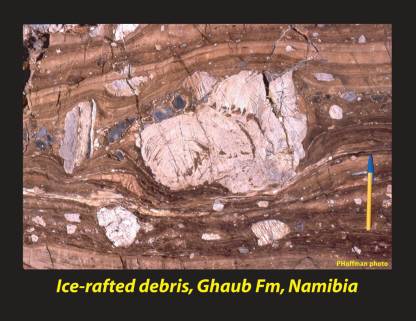 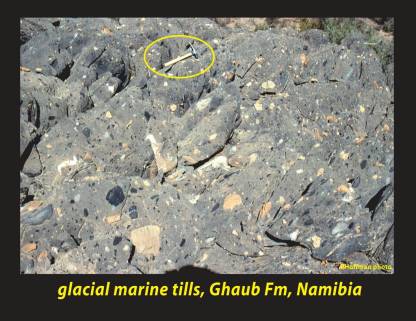 The difference from a till (tillite when lithified) is one of semantics; a till is directly deposited by glacier ice and diamicton could be deposited by a landslide or a glacier (Fig. 3).  Given much of the pre-Cenozoic record is marine the glacier is rarely directly involved in deposition, hence the use of the word diamicton.  In most cases the glacier or ice sheet simply supplies debris to the edge of the continental shelf where it is re-sedimented by a range of underwater mass movements (subaqueous sediment gravity flows).  Semantics you might say?  To a certain extent yes, but diamictons can form from a range of different processes glacial and non-glacial (Fig. 3).  The presence of clasts with striations may help show a glacial influence but is not always diagnostic.  Dropstones may help (Fig. 2).  If the sediments are fine grained and suddenly you find a huge pebble or cobble you have what is known as a hydrodynamic paradox.  The flow rate needed to move the pebble would not allow the fine sediment to be deposited.  The problem is solved is the pebble was dropped in from above via a melting iceberg.

Figure 3: Various processes that can form diamictons in the geological record.  Note that glacial processes are just one way.  (Source: Eyles and Januszczak 2004).

The Cambridge geologist Brian Harland (1917-2004) gathered evidence from throughout the world including Scotland and proposed a great ‘infra-Cambrian’ glaciation which extended to low latitudes (Harland, 1964; Fig. 4).  The evidence for low latitude glaciation comes from the palaeo-magnetic record, with important evidence eventually emerging from Australia.  Ferrous minerals become orientated to the poles during deposition and the orientation and declination can be used to reconstruct palaeo-latitudes.  Figure 5 shows the emerging evidence.  There were a number of key issues: 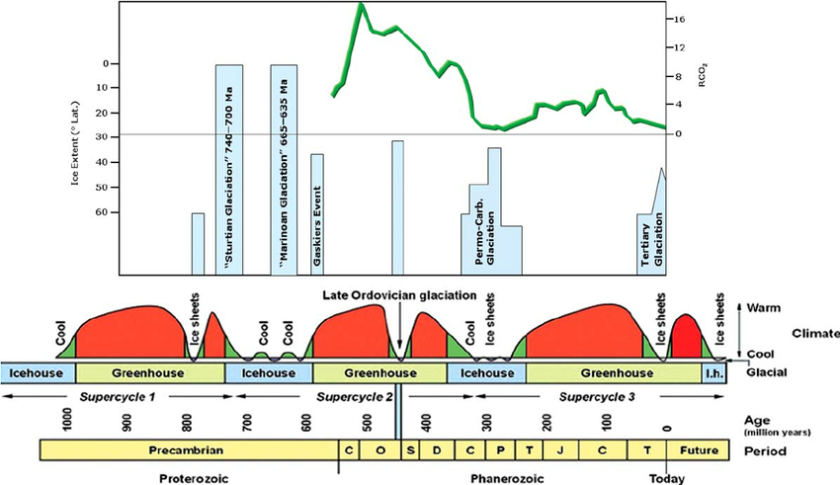 Figure 4:  History of ice on Earth. Note the term ‘infra Cambrian’ was an old fashioned term used for the Neoproterozoic which is the most recent part of the Precambrian.  (Source: Craig et al., 2009)

Work in the 1960s by Mikhail Budyko and largely ignored at the time was re-considered in the 1990s by those advocating global glaciation.  He modelled something that is now referred to as the ‘runaway albedo scenario.’  Albedo is the term we use for the reflectivity of the earth’s surface.  Snow and ice (high albedo) reflect more solar radiation back to space than dark forest or ocean (low albedo).  We can imagine a feedback loop in which colder temperatures lead to more ice and snow and in turn to higher albedo.  Higher albedo means more solar radiation is reflected back to space causing temperatures to fall further leading to more snow and ice.  The key contribution of Budyko (1969) was to realise that this feedback loop was potentially unstoppable once glaciation proceeded south of 30 degrees of latitude.

In a short paper in 1990 Joseph Kirschvink first coined the term ‘snowball’ Earth.  The concept that was later developed and expanded by Paul Hoffman and his co-workers examining glacial deposits primarily in Namibia (e.g., Hoffman et al., 1998).  Gabrielle Walker popularised the idea via a wonderful piece of science writing (Snowball Earth; Walker, 2003). 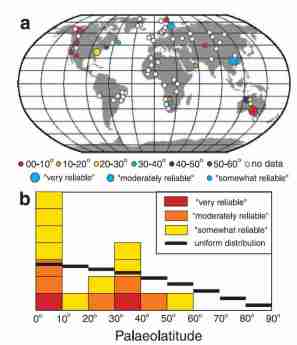 Step One: Enhanced continental weathering causes a draw-down in carbon dioxide, a greenhouse gas, which results in global cooling.  This enhanced weathering may have been associated with the break-up of an early supercontinent (called by some: Rodina).  The rifting uplifts the continental margins revealing fresh silicates for weathering.

Step Two: Glaciation initiates and is accelerated by albedo feedback.  Once it precedes below 30 degrees of latitude it become unstoppable and the plant and its ocean freeze.  Life may survive in the deepest of oceans, where the lack of oxygen causes the deposition of iron stones.

Step Three: With no exposed rock to weather there is nothing to counter the build-up of carbon dioxide which is out-gassed by volcanoes.  Greenhouse gases build-up progressively over millions of years.

Step Four: Greenhouse gases force the planet into a super hot state which breaks it free of ice.  Deglaciation occurs and intense weathering of glacial sediments by acid rain leads to the deposition of carbonate layers in the oceans. With lots of continents around the tropics the weathering is enhanced.  A run away albedo effect causes the world to gradually freeze and once it exceeds 30 degrees in latitude it is unstoppable.  There is global shutdown of the hydrological systems and life is only able to survive in the deepest oceans.  The anoxic conditions in these oceans lead to the deposition of iron stones.  With the continental area covered by ice, weathering ceases.  Gradually over a period of time carbon dioxide begins to accumulate in the atmosphere

The hypothesis has generated a huge amount of debate and research (Fairchild and Kennedy, 2007).  One of the challenges is the absence of a suitable modern analogue – the key to the past is the present, does not apply.  Glacial processes today are very different from a global planetary freeze.  This is the crux of the issue in many ways since, snowball earth invokes ‘unknown’ at least on this planet conditions.  Glacial geologists hit back interpreting the sedimentary record in terms of process operating today and finding evidence for fluctuating ice margins.  Others attacked the dating and specifically evidence for synchronicity in time of the palaeolatitude evidence.  This debate has range for almost 20 years.  So where does it stand now? 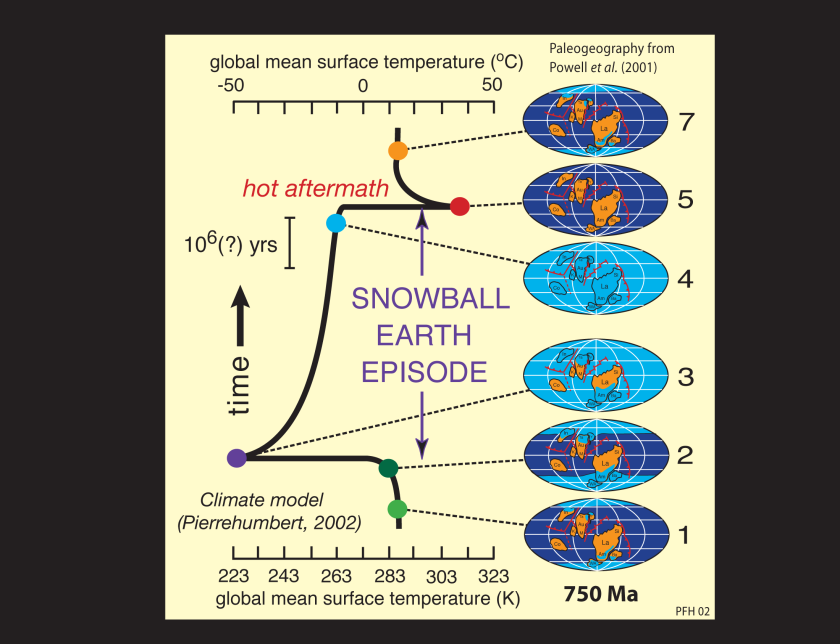 Fairchild and Kennedy (2007) reviewed the state the debate elegantly (Fig. 7).  They made reference to work that suggested that an alternative explanation for the low latitude glaciation was a shift in the axial tilt of the earth (Fig. 8).  The evidence for such instability in the axial tilt is not however convincing, although it remains a possible alternative explanation.  Others have argued about the degree to which the glaciation was ‘complete’ and have coined the term Slush ball Earth accommodate such an idea.

However, by the far the most convincing alternative explanation has been proposed by Eyles and Januszczak (2004).  Their ‘zipper-rift’ model suggests that the record for direct glaciation is more limited than is supposed; that much of the record consists of large subaqueous mass flows into rifted basins; that the glaciation did occur at low latitude but was diachronous reflecting local adiabatic rather than global glaciation.  The key to this was the rifting of Rodina the supercontinent that formed and broke-up in the Neoproterozoic (Fig. 9).  Today the East African Rift illustrates this process.  Here two plates are pulling apart, it starts with a terrestrial rift valley which ultimate is flooded to form a shallow sea that will in time form an ocean if sea floor spreading occurs.  The rift flanks are uplifted by the buoyant warm volcanic rocks which rise to the surface to initiate the rift.  The same process occurred along the western sea board of Europe as the North Atlantic opened.  Large scale rifting associated with the breakup of a supercontinent causes widespread uplift and weathering.  This draws down atmospheric carbon dioxide causing cooling.  Local ice caps form on the rift flanks associated with this cooling and the adiabatic uplift.  They supply glacial debris to the growing rift basins (Fig. 9) which are also tectonically unstable and therefore associated with olistromes (i.e., large mass movements; Fig. 3).

The key to this model is that the rifting and the deposition of the sediments occurs by known geological processes (i.e. active today) and is diachronous.  That is the same type of deposits and sedimentary sequences occurs in different locations but at slightly different times.  There is also no need to invoke extreme climate events or global glaciation. 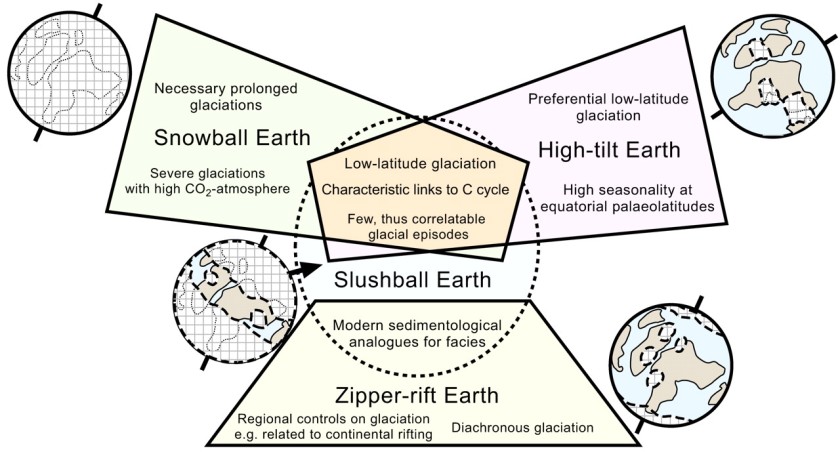 Figure 7: Alternative hypothesises for low latitude glaciation according to Fairchild and Kennedy (2007). 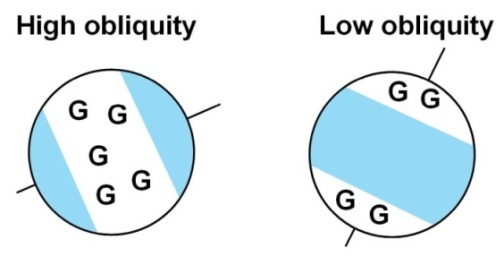 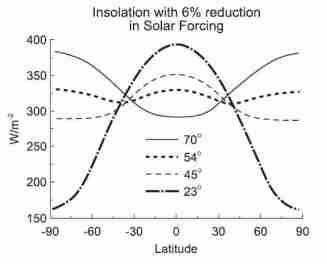 Figure 8: Axial tilt as a mechanism for low latitude glaciation.  The right panel shows the distribution of solar radiation with different degrees of axial tilt.  (Sources: www.snowballearth.org; and Fairchild and Kennedy, 2007). 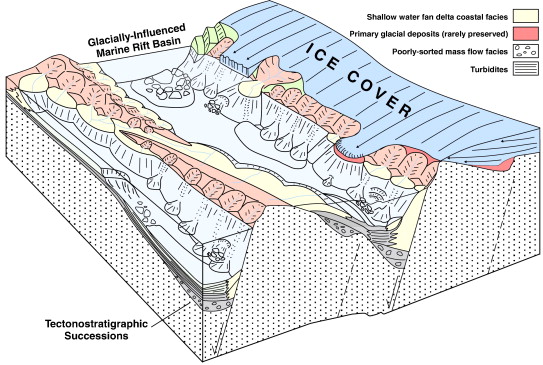 Figure 9: Breakup of Rodian about 750 Ma and the associated sedimentary model (Source: Eyles and Januszczak, 2004).

As the debate has continued there is a gradual move to recognise more conventional (i.e. current) geological processes as being the key to interpreting these records.  In some ways one could call it a triumph for uniformitarianism over catastrophism.  While the heat in the debate is beginning to cool, it would be unfair to suggest that it is over or that ‘zippers’ have vanquished the snowballs.